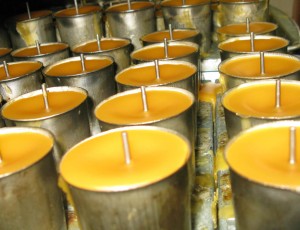 Ed and Christine Barth, owners of Beeswax Candle Works in Cottage Grove, recently installed a 21-panel solar array on the roof of their candle wax shed. The system is expected to generate 4,811 kilowatt hours of electricity a year, which will offset their electricity bill by around $360 annually.

“We were always intrigued with solar power,” said Christine. “We researched the possibility of installing a system for several years before we made the move. It felt like the right time, and the solar incentive from EPUD definitely helped push the project forward.”

The Barth’s received an EPUD rebate of 15% of the total project costs, and expect the project to meet roughly a third of their annual electricity needs. “The best part is on sunny days when we can watch the meter running backwards. It makes the payback seem nearly immediate,” said Ed. “Beyond that, our business is all about natural and sustainable. Solar panels really fit with our target niche in the industry and reinforce our values as a company.”

Beeswax Candle Works uses 100 percent beeswax to make more than 140 varieties of candles. Unlike others brands, their candles contain no paraffin, a petroleum by-product, and are entirely hand-made, packaged and shipped by their local three-person team.

After shipping in 100% beeswax from Montana, the Barth’s melt the wax to 180 degrees and use a sophisticated (and secret) gravity filter to remove particulates. “This makes the wax more consistent for a higher quality candle,” says Ed. And consistency is important, considering the company goes through 12,000 to 15,000 pounds of beeswax per year.

“We ship everywhere from South Africa and Japan, to the East coast of the US and right here in Cottage Grove, said Christine. “There really seems to be a wide demand for this type of natural product and we are happy to fill it.”

Beeswax Candle Works products can be purchased locally in a variety of stores including DTE, Sunshine, Bookmine, Kiva, Greater Goods and online at beeswaxcandleworks.com

It’s not often your local utility company arrives at your doorstep with a check made out to you, but that’s what happened to Pat Dodge, plant manager at the Swanson Group in Noti. Recently, EPUD delivered a check for $150,000, roughly 70% of project costs for the upgraded compressed air system. The project was subsidized by state incentives for energy efficiency projects, and will translate to an annual energy savings of 10% for the plant.

“This project was a no brainer for us,” said Dodge. “With the economy the way it is, it’s all about seeing a quick return on investments. This project will pay for itself in nine months and we’ll begin seeing higher production and lower energy bills immediately.”

The idea for the project started in 2009 when Rogers Machinery Audit Group completed an energy assessment of the Swanson facility. The report showed the plant was operating at low efficiency and had much to gain by upgrading the air compression system. Swanson depends on compressed air to operate the many moving parts in their highly-automated mill facility.

“We didn’t have enough air throughout the system to run the facility like we wanted to,” said plant maintenance manager Albert Diggle. “Also, if one of our compressors went down, we were in trouble. We didn’t have the back-up needed to ensure steady production.”

With the help of EPUD, Rogers Machinery, and the Energy Smart Industrial Program run by Bonneville Power Administration, Swanson purchased new compressors, mist-eliminators, and fans as part of the upgrade. They also improved existing pipes to distribute air more efficiently and minimize pressure loss. “I could feel the difference walking around the mill the day after installation. I could feel it working,” said Diggle. “We have higher production, better ability to make small adjustments to our equipment, and are less affected by cold weather. Plus, our electric bills are smaller.”

Thanks to this project, the plant will save 878,558 kilowatt hours of electricity annually, enough to power 58 homes for a full year. $52,000 in annual energy bill savings. 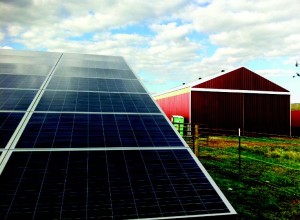 Jim Sly, owner of Sly Farms in Creswell, now thinks of days in terms of kilowatt hours. “A day like today that’s sunny and bright is a 400-500 kilowatt day,” says Sly. “The darkest day is around a 100 kilowatt day.”

As of September 22, Sly Farms is running the largest solar array system in EPUD’s District. The 22′ wide by 208′ long, 62-kilowatt solar electric system will generate enough electricity to power about 5 homes per year. This new system surpasses the second largest solar array in the EPUD District, a 60-kilowatt array installed in 2006 on the Camping World building in Junction City.

Sly urges other parties to invest in these projects when financially viable, but emphasizes the amount of management effort needed to guide the process. “It takes a great deal of time and energy to complete a project this large, but it can be well worth it,” said Sly. “Now, my biggest hurdle is to figure out how to wash the panels.”

When Linda Kienlen of Christus Farm, Inc., decided to update the lighting in her horse arena, she had no idea how much it would improve the quality of her facility. “It was an immediate difference,” said Linda. “These lights are brighter, come on instantly, and the motion sensors allow us to only use the lights when and where we need to.” Linda called EPUD after becoming frustrated and concerned with the quality and energy-efficiency of her old lights. With her call, Christus Farm, Inc., became one of the many EPUD customer-owners to take advantage of our Commercial/Industrial Lighting program. EPUD’s program and the Oregon Business Energy Tax Credit combined to cover 82% of the lighting project.

“It was a nice surprise to have so much of the cost covered,” said Linda. “Had I known the price would be so low, I would’ve called EPUD earlier!” In addition, the new energy-efficient lights will save 14,494 kWh a year, which cuts their energy bill in half and offsets enough CO2 to equal planting six acres of trees. “We’re happy, our customers are happy, the horses are happy, even the barn owl is happy because the lights turn completely off at night. I highly recommend taking advantage of this great program.” Christus Farm, Inc., is located in Jasper and is a family-run, full service hunter/jumper, boarding and training facility for horses. For more information call 541-726-1505 or visit www.christusfarm.com. 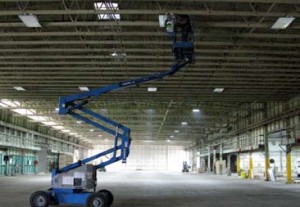 When Roseburg Forest Products moved in May to their new facility in Junction City (previously Trus-Joist), they knew they would have to do something about the lights.

“There were no light switches in the entire 160,000-square-foot facility,” said plant Manager Jim Oliphant. “It was originally built to run 24/7 with full power so the setup was wrong for us, and the lights were 25 years old and very inefficient.”

With support from EPUD, Roseburg Forest Products replaced 145 outdated fixtures with new, high-performance fluorescent fixtures. The new lighting saves electricity by reducing the input wattage and also reduces the runtime by using advanced occupancy controls that turn on lights only when human movement is detected in the space. This all adds up to stunning energy savings for the company. With the new lighting in place, Roseburg Forest Products will reduce their annual energy usage by 44%, or roughly $11,000/year. More than 73% of the $70,000 project was funded by rebates and tax credits, and the project will pay for itself in less than 17 months. “This is a great program,” said Oliphant. “We highly encourage other businesses to consider taking advantage of the incentives.” For more information on Roseburg Forest Products, visit www.rfpco.com.

Perhaps it comes as no surprise that Alan Bair grew up to be founder and president of Pacific Yurts in Cottage Grove, given his childhood hobby. “I loved to build forts,” said Bair. “I’d build forts from anything I could find. You name the material; I built a fort from it.” Today, Pacific Yurts makes and sells hundreds of yurts a year; only these “forts” aren’t kid stuff. By incorporating innovations based on customer suggestions, Bair has moved the yurt from the simple, traditional dwelling of Mongolian nomads to an engineered structure capable of supporting all the modern comforts of home, including full kitchens and bathrooms, energy-efficient insulation, skylights, and even water-catchment systems.

Pacific Yurts are so versatile, they are found across the globe, from tropical islands to snow-covered mountains. The yurt is a symbol for simplicity, conservation, and minimal environmental impact, as is the business itself. Pacific Yurts recycles building materials and encourages customers to return yurt covers to be turned into new products. Bair took another sustainable step and became an EPUD Wind Power Business Partner. They now receive 25 percent of their power from wind. “The founding idea for our company was to help people get closer to nature while minimizing their impact on it,” said Bair. “Purchasing renewable wind power is right in line with that.” In 2009 Pacific Yurts was honored with a Certificate of Appreciation from the Mayor of Cottage Grove for its “overwhelming commitment to improving the community.” 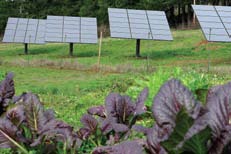 Thistledown Farm in Junction City and Winter Green Farm in Noti have both recently installed solar photovoltaic systems using rebate money available from EPUD Energy Services. Together these systems will produce enough clean, green power to equal the annual usage of about three average homes. EPUD offers a residential solar electric incentive of $2 per watt, for up to $10,000. EPUD also offers a commercial solar electric incentive of $1 per watt, for up to $25,000.   Winter Green Farm is a two-family farm growing certified organic crops since 1984. They raise grass-fed beef and grow certified organic medicinal and culinary herbs, vegetables, and seeds for the wholesale market. They can be reached at 541-935-1920, or visit www.wintergreenfarm.com Thistledown Farm specializes in traditional vegetables, berries, orchard fruits, herbs, honey, nuts, root vegetables, ethnic specialty crops, salad and other greens. They also sell homemade pies, apple cider, jams, dressings, plants and flowers. They can be reached at 541-689-2019.