The first phase became operational in 1992. The second phase expansion started up in 1993. The project’s total cost was $2.6 million. It generates about 15 million kilowatt hours (kWh) and approximately 2.5 average megawatts (MW) annually. This is the equivalent of nearly 33,000 barrels of oil per year. It provides enough electricity to power about 1,000 homes. The project paid for itself in about seven years. Since the Short Mountain Landfill is an operating landfill and plans to accept refuse for many years into the future, this project will continue to produce electricity for about another 20 years.

In 1985 Emerald approached Lane County with the concept of a landfill-gas-to-electricity plant. Lane County subsequently put out a request for proposals that was granted to Emerald. In November 1988, Emerald’s Resource Planning Citizens Advisory Committee, a customer committee charged with studying EPUD’s resource strategy, recommended to the Board of Directors development of the Short Mountain Project. After extensive study, a public hearing, and careful analysis, Emerald’s Board of Directors made the final determination to proceed with development in March of 1991.

While this project was unique in the Northwest at the time, the technology is now widely used. As of December 2005, there were 395 similar operating projects in the U.S. and another 600 with potential for development. These 395 projects generate about 9 billion kWhs annually-enough energy to power three communities the size of Eugene-Springfield.

The Short Mountain project brings many benefits to the local community, EPUD, and the Pacific Northwest. As a “green” or “renewable” resource, it is consistent with the resource priorities of our customers and the region. The project also diversifies Emerald’s resource portfolio, lowering our risk; enhances Emerald’s bottom line; uses a “homegrown” renewable resource; creates two full-time jobs; and has a positive economic impact on the community. It uses the best available emission-control technology, and significantly reduces methane, a powerful greenhouse gas, which naturally escapes from the landfill. Equally important, Short Mountain is a relatively low-cost resource that will help keep Emerald’s rates stable. Through a Billing Credits agreement with BPA, the project will average $250,000 per year in additional revenue for Emerald. Lane County also receives a royalty of about $26,000 per year, and avoided having to build a $1.1 million collection system. The project also contributes over $12,000 per year in property taxes to schools and local and state governments. 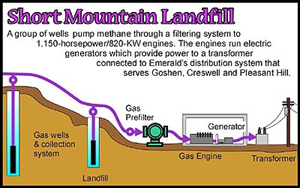 The flow chart above graphically demonstrates the process. Starting at the left, a combination of vertical and horizontal wells extract the landfill gas. 30 vertical wells ranging between 45 and 85 feet deep, and the 65 horizontal wells buried in the landfill capture the 1,200 cubic feet per minute of landfill gas used in the power plant. As new sections of the landfill are filled, Emerald will install additional wells to replace old wells. Once the landfill gas is extracted from the individual wells, it is piped through the collection system and brought to the power plant. The gas passes through a clean-up system that removes the moisture and filters out particulates and other impurities. After the gas is cleaned, it’s injected into the engine carburetors for combustion. The Caterpillar engines Emerald were specifically designed to run on landfill gas. Combustion of the gas in the engines turns the engine crankshafts, which turn the generators, which creates the electricity. Through switching gear and step-up transformers, the electricity is tapped directly into the utility distribution grid for use by Emerald’s customers in the Goshen, Creswell, and Pleasant Hill areas. 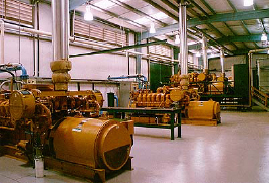 The project is also environmentally sensitive. Emerald is a partner with the U.S. EPA in its Climate Challenge Initiative to combat global warming. Landfill gas is essentially methane, which is a powerful greenhouse gas about 22 times more harmful than carbon dioxide. In the combustion process to create electricity, the landfill’s methane is converted to carbon dioxide, thereby significantly reducing the greenhouse effect of the landfill.

The benefits of a typical 2-megawatt plant like Short Mountain is the same as removing 17,000 cars and their emissions, or planting 23,000 acres of forest, or forgoing the burning of 430 railcars of coal! The U.S. EPA estimates that if the additional 600 landfills in the U.S. were to use this technology, we could generate 13.7 billion kWhs of electricity – the equivalent of 10 coal-fired power plants – generating enough electricity to meet the power needs of over a million homes. This would also reduce greenhouse emissions equivalent to taking 14 million cars off the road. In addition, by capturing the landfill gas, this project has nearly eliminated the odor problems at Short Mountain.

Concern for the environment also motivated Emerald to choose equipment that uses the best emission-control technology available. The Caterpillar engines are specially designed to be “low emission” engines, low enough to meet the stringent California emission standards. The Lane Regional Air Pollution Authority approved and permitted the project. The Short Mountain Methane Power Plant takes an environmental problem and changes it into a green and profitable solution. In 1996, it was awarded the USDOE National Award for Energy Efficiency and Renewable Energy.